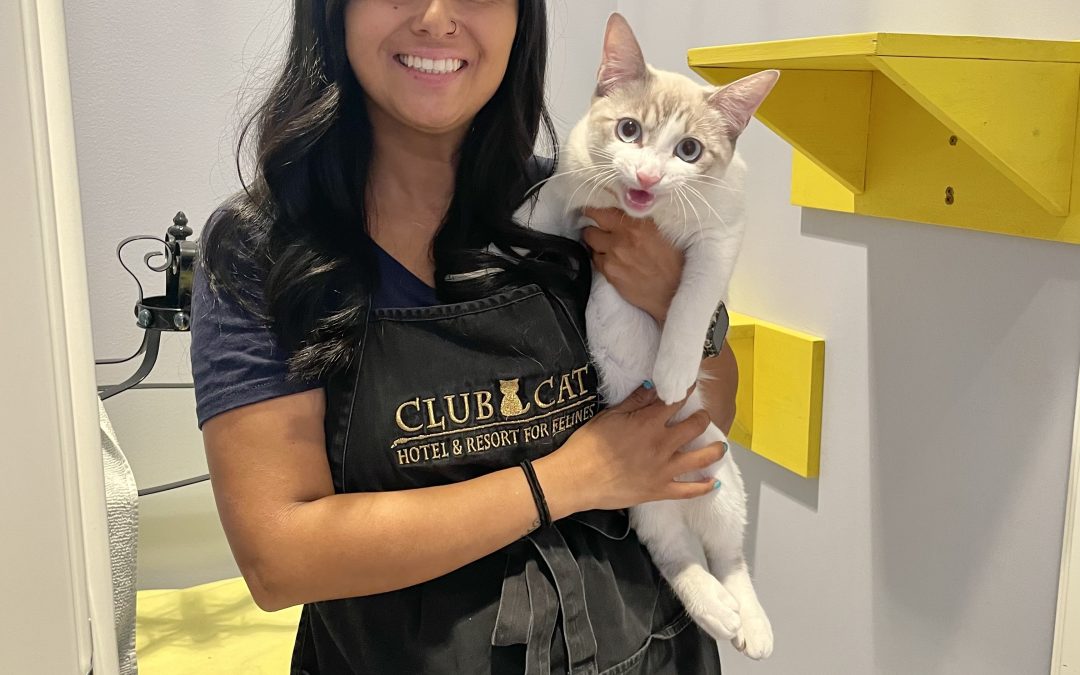 Jessica first climbed on board at Club Cat in April of 2021 as a Caretaker. Anticipating Club Cat would experience explosive demand with everyone cooped up for the previous year, Shana, Club Cat’s Founder & Chief Cat Officer had just expanded the Club Cat team. Due to Jessica’s employment situation at the time, she was only able to work part-time.

One of her references was her (now former) boss. She raved about Jessica and made Shana promise that she wouldn’t steal her away. Shana assured her that she wouldn’t and they both laughed. After surviving the pandemic as a brand new business, the notion of bringing on a full-time manager seemed a world away. Little did Shana know that the promise she made would be impossible to keep.

Within a few weeks, Club Cat had a need for an additional Concierge. Shana asked Jessica if she was interested in working not just with the kitties but also with the customers and she was. A few months after that, Shana asked her if she would be willing to step up as Club Cat’s weekend manager and again, to Shana’s delight, she was.

Jessica officially became Club Cat Irvine’s full-time manager in the beginning of October. She is everything Shana had envisioned in a full-time manager and so much more: effective, genuine, detail oriented, ethical, hard working, a team player, organized, calm, professional yet personable, fun to work with, and more. Best of all? She is completely committed to providing the best service and care to our kitty cats and their parents.

In the end, Shana didn’t exactly break her promise. She’s just borrowing Jessica for as long as paw-sible! 😹 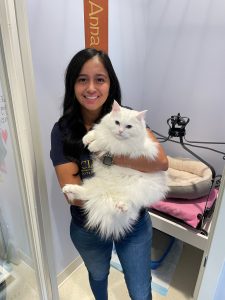 CC: Your mother and family are very involved with fostering cats. Tell us about your childhood growing up with cats.

JN: I have grown up with cats ever since I can remember, whether they were family owned or fosters. The fostering journey never has a dull moment. I have gotten to meet so many different cats, as well as watch some of them grow up from bottle babies to grown kitties. It’s so fulfilling to be part of the process that gets these beautiful babies their furever homes. At the same time, it can be hard to let go of the babies you’ve spent so much time with.

CC: What is one of your favorite fostering stories? 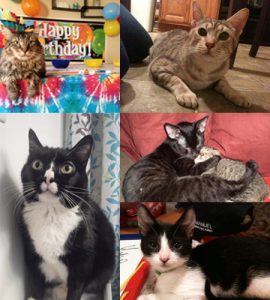 JN: One of my favorite foster stories would be the time we rescued from a hoarder house. It was quite an experience and very bittersweet, It felt great knowing that we were saving these babies, but it was also hard to take them away from a lady who had good intentions. We rescued about 40 cats from that house, and with foster homes being slim, my family fostered 20 of those kitties in our home (which already was a home to our 5 family cats!)  until other families could foster or they got adopted. It was so awesome to sleep with and wake up to so many cats, there was a cat everywhere you turned!

CC: Tell us about your own kitties. Names, ages, quirks…

Jessica with Lucifer & Dexter, her “roomies”

JN:I don’t currently have any kitties myself, but my sister (who is my roomie) has 3 kitties. Dexter is our 6 year old food obsessed chunky monkey, he will do anything for a snack! Princess is the 2-year-old brat of the bunch. She loves neck scratches and terrorizing the house and her brothers (lol). Lucifer is our 3-year-old black sheep, he is timid and to himself but loves to cuddle when it’s bedtime.

CC: What initially drew you to Club Cat?

JN: I found Club Cat on my hunt to work with animals. I had never seen a cat only boarding facility, so I initially loved that because everywhere else was more dog focused, I loved the luxury part of Club Cat, it just looked like such a cute, fun place to work at! 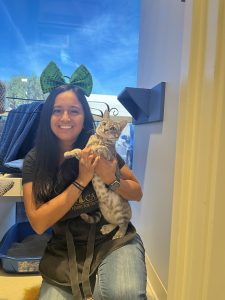 CC: What is your favorite part(s) about working at Club Cat?

JN: My favorite part of Club Cat is when we get cats that stay long term. Even when they stay a week or two, the cats’ personalities just bloom and you can’t help but fall in love and get attached! I like to think they get attached to us humans too (lol). Another favorite part of mine is seeing how the food obsessed cats act at feeding time. Jumping, yelling and scratching at the door. It’s funny to know that animals can be such foodies too!